I thank Mike from Omaha for this conundrum of some magnitude.

Once, years ago, when I was convalescing from a near fatal snakebite after a failed attempt to hypnotize a Cobra, I played a good deal of golf. And as Zamboni, which is I, is often lucky to meet the wisest people in any circumstances, the following happened to me this day.

Being a single I was assigned to tee off with a very old man who could hit and walk only with much difficulty. I learned his name was Cy Levine and he was a shoe salesman, very much retired. The afternoon began to get very frustrating and slow for me as he was pushing probably ninety. Trust me, I am in fact answering this Bagel quandry.

Gradually I began to enjoy myself as I discovered that though his swing had disintegrated, his humor was very much in tact. So when this round of record-breaking length was over, the last putts were sunk and I approached him for the customary handshake, something interesting happened.

He gripped my hand like a man half his age, drew me into him and said, “what d’you say your name was?”

I tell him, and he say to me, “Zefferrelli,” (his hearing not so good, but he continue) “wherever you’re going, whatever your goal; keep your eye on the bagel, and not on the hole.” And he release my hand with a smile and I never see this Cy Levine again. 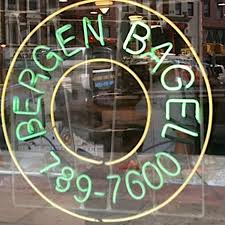 So my friend, Mike, as to actually how they make these perfect holes and what they do with them- to those questions I am dumb like post. But as for the why… bagels have the hole for this reason, because they remind us to keep our eye and our mind on what is there, what we have, not on what we don’t. So much in life comes down to knowing what you can affect, and what you must let roll off your back.  Afterall, can you spread shmear and lox on something that is not there?

Zambones thanks you for asking, and invites the questions of others.